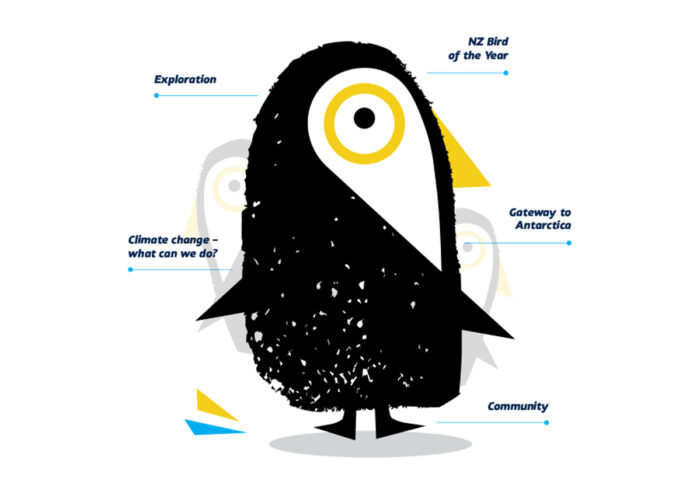 Christchurch has a long history of involvement with the Antarctic, from the early days of Southern Ocean exploration, as a vital port during the heroic era expeditions of discovery and the scientific age of the International Geophysical Year, through to today as a hub of Antarctic research and logistics.

NZ Bird of the Year

The hoiho/yellow-eyed penguin is one of 17 species of penguins living in the Southern Hemisphere and was voted NZ Bird of the Year in 2019. One of their four major breeding grounds is on Banks Peninsula.

Like penguins, Christchurch is vulnerable to the physical impacts of climate change, such as sea-level rise, drought, and floods. That’s why the city has a Climate Smart Strategy, to reduce our greenhouse gas emissions by saving energy, reducing waste and by being powered with renewable sources of energy such as wind, hydro and solar.

We know better than most, how important it is to be part of a community, supporting those that are in need and sharing the good stuff. Just like penguins do in their colonies. This year has given us new challenges to face together as a community and we can share our stories as we come back out into our city again.

We use cookies on our website to give you the most relevant experience by remembering your preferences and repeat visits. By clicking “Accept”, you consent to the use of ALL the cookies.
Do not sell my personal information.
Cookie SettingsAccept
Manage consent

This website uses cookies to improve your experience while you navigate through the website. Out of these, the cookies that are categorized as necessary are stored on your browser as they are essential for the working of basic functionalities of the website. We also use third-party cookies that help us analyze and understand how you use this website. These cookies will be stored in your browser only with your consent. You also have the option to opt-out of these cookies. But opting out of some of these cookies may affect your browsing experience.
Necessary Always Enabled
Necessary cookies are absolutely essential for the website to function properly. These cookies ensure basic functionalities and security features of the website, anonymously.
Functional
Functional cookies help to perform certain functionalities like sharing the content of the website on social media platforms, collect feedbacks, and other third-party features.
Performance
Performance cookies are used to understand and analyze the key performance indexes of the website which helps in delivering a better user experience for the visitors.
Analytics
Analytical cookies are used to understand how visitors interact with the website. These cookies help provide information on metrics the number of visitors, bounce rate, traffic source, etc.
Advertisement
Advertisement cookies are used to provide visitors with relevant ads and marketing campaigns. These cookies track visitors across websites and collect information to provide customized ads.
Others
Other uncategorized cookies are those that are being analyzed and have not been classified into a category as yet.
SAVE & ACCEPT
Pop Up Penguins