The Grand Finale to Pop Up Penguins 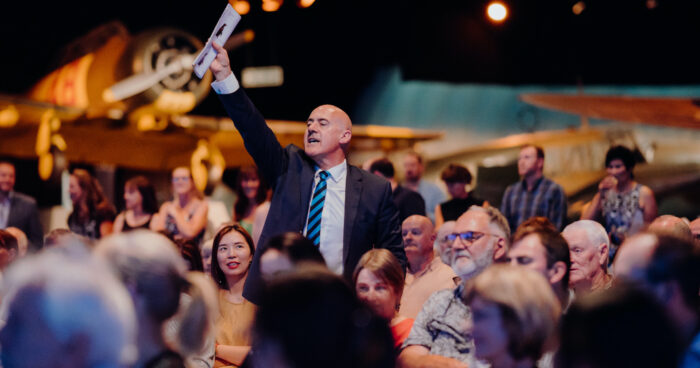 After nine weeks on display in and around Christchurch, the large sculptures from the Pop Up Penguins sculpture trail were sold at auction on Wednesday 24th February 2021, by Presenting Partner, Harcourts. The final hammer price total was an amazing $1,005,500! Wild in Art is delighted to be giving 75% of the proceeds of the auction to local charity, Cholmondeley Children’s Centre.

Over the summer, the 120 brightly coloured sculptures had delighted trail followers, who have searched for the penguins from the city centre to Lyttelton, Kaiapoi to Akaroa and everywhere in between.

On Saturday 13 and Sunday 14 February, all the penguins from the trail gathered one last time in a special display at the Air Force Museum in Wigram, Christchurch. This was a joyful celebration that welcomed over 8,000 penguin friends saying goodbye to their favourite flightless birds.

In the nine weeks of the trail, the Pop Up Penguins official app was downloaded by over 10,500 people, who collected penguins just under 300,000 times. The app was generously supported by sponsors and supporters who awarded trail followers with free ice creams, coffees, stickers, activity books and many more exciting competition prizes.

The 65 little penguins that were decorated by schools and were also part of the public art trail, have been returned to their schools. Each school took part in the project’s Learning Programme which taught students about climate change, penguin conservation and the Antarctic. Many of the schools had taken part in Christchurch Stands Tall, Wild in Art’s first event in the city which was held in 2014.

In the last 12 years, Wild in Art has helped raise over $29 million for charities and injected $4.6 million into the arts sector through the commissioning of artists to decorate the many diverse shaped sculptures they have produced for events across the globe. The company, which is based in the UK, has been hit hard by restrictions coming from the Covid-19 pandemic, which makes this New Zealand event all the more special for being the only Wild in Art sculpture trail to be launched anywhere in the world, in 2020.